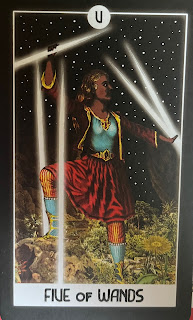 First Impressions:  This card is strange as it does not give the impression of competition and / or conflict that the traditional five of wands gives

Guidance:  Sometimes taking on too much at once occludes your responsiblities

Where I'm At:  I had to be at the Cleveland plant today and I had an interesting experience on  my way to the office.  I stopped by Burger King because I was starving and the gentleman working called me hun and other endearments and I was a little offended, but then I got the window and it was this older very well dressed Black gentleman.  I was wearing a long sleeved shirt and a tie and he just looked like he was proud of who he was and what he was doing.  I made me think about whether I carry myself like that and the answer is most likely no as I don't really care about dressing up.

Weather:  It started out nice this morning when I needed to go into the Cleveland office, but it got hot and gross later in the day.  I went out for dinner with Tiffany and by the time we got to Ohio City, it was absolutely disgusting.  It was about 90 degrees and incredibly humid. 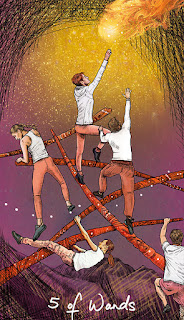 First Impressions:  Competition, climbing toward the light, competition with oneself

Book:  Competition, Conflict, Ambition, being pushed by others to excel,

Guidance:   Retreat from energies that are draining your progress

This is an interesting card for me to pull because there are times I feel I need to compete with the evil M.  However, the truth of the matter is that I don't need to compete with her at all.  I'm my own person and I do an awesome job at what I do.  She feels the need to compete with me, but that doesn't mean I need to compete with her.  I view this like a fight, when someone is pushing and pushing against someone who doesn't push back, ultimately I will step aside and she will fall flat on her ugly face.  I know that's super mean of me, but I'm so tired of all her crappy little comments and judgementalism.  Oh well, I know my boss doesn't buy into her garbage so I just need to let it go.  She will get hers eventually.

Where I'm At: I'm at home sitting in the living room while Wendy rolls around on the floor like the goof she is.

Weather: It's flipping cold outside.  Even though it is March it is 15 degrees out and snowing.

First Impressions:  Battling for a cause, strife

Guidance:  Reality clashes with ideals. Patience and perseverance are needed in order to accomplish goals.

It was such a day of contrasts today as I spent the day learning and being passionate about really interesting stuff.  Then I got sucked back into my day job when Scott called me.  I was a little pissed off, but I also know that he has a job to do as well and that he needed my help to do it well.  I also appreciate the fact that he is really gaining an appreciation of OCM.  The real struggle is my own internal struggle as I see where I want to go with my life, but I'm stuck where I'm at because of finances.  I feel trapped, but I don't know how to change my life and move into a place of living from passion.  Part of feeling trapped is the bills because if I had everything paid off, I could afford to make less money.  However, it seems like there is always something that needs to be paid.

One of the things I need to do is to be better at eating cheap when I travel because if I don't spend it, I get to keep the per diem and if I'm careful I could use some of that to pay my bills off.  I also need to just stop spending so much.  That is an inner conflict though because I know that I use spending as a way to make myself feel better.  I know it isn't smart, but sometimes I just feel like I bust my butt for everyone else and I don't get anything for me.  When I feel that way, I have a real tendency to spend, spend, spend.  Maybe I just need to ritually start turning over my spending every day and ask them to help me.

Deck:  World Spirit Tarot
First Impressions:  Conflict, anger, crossed swords (wands)
Book:  Conflict often brings surprising gifts, being challenged causes you to get clear on what you believe and builds your self confident
Guidance:  Do not run from confrontation, but see what insights it might offer, be confident, but playful
Journaling
It was a rough day today as it just felt like there was so much conflict and ugliness, particularly among the consulting team.  It feels like certain players just don't want to play by the rules, but want to make their own rules.  And it's really frustrating because they don't see the fact that they are making decisions that are not theirs to make and as such are causing anger and dissension among the ranks.  I also  see a total lack of personal responsibility and willingness to take ownership for their bad behavior.  However, I also see the person who is in charge being unwilling to engage in confrontation.  It's really hard to call people on their bad behavior, but if you don't do it and you try to take the nice way, things never get better.  I have learned the hard way that idiots who refuse to follow directions generally need to be told they are idiots before they get in line.  If you just continue to accommodate them, they will continue to behave badly.
The problem is that I'm not in charge of this rodeo so I'm not empowered to make them stop behaving badly and if I do step in, that just makes the situation worse.  However, it is also not my rodeo and I need to stop taking it all personally and stop making it about me.  It's not about me and I'm not the one that needs to tamp down the insurrection.  This is a good lesson for me about leadership and management because I see the person in charge doing the wrong things.  She needs to squash the rebellion and cut off their avenues of escape/escalation.  And until she is willing to do that, we won't get very far.  She is just way to accommodating.  There is a difference between being in a position where you don't truly have power and one where you don't.  I generally don't have power so I need to look for allies to help enforce things.
Gratitudes
Going to sleep on time
Watching Anthony Bourdain in Ghana
IMing with Cam
Getting support from my extended team
--------------------------------------------------------------------------------------------------------------------
December 26, 2016

Book:  Learning your own strengths and weaknesses, helping ourselves and others, old flaws are challenged

Guidance:  Do your best for your own good and the good of others, shake things up and see what happens 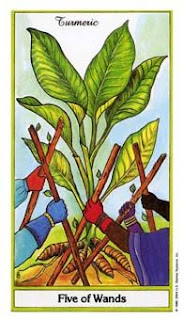 Interesting that this was not technically the card of the day.  I clicked on Draw a Card in the app instead of Today's Card and this is what I got.  This card is very apt though as I am playing with fire as I am letting all rhyme and reason go out of my head where a certain someone is concerned.  I could let myself get totally consumed by his flame and that would not be a healthy place for me to be, but there is a part of me that doesn't care.

I'm still not sure what the meaning of this card is.  I originally thought it was about playing with fire and getting burned, but the fire breather controls the fire without getting burned.  I think this requires some more prayer and meditation.

The five of fire can be an incredible high, but it can also be dangerous as the person breathing fire and /or the audience can get burned.  I think the message for me is to be careful.  I have the tendency to become obsessed and let myself be consumed by people and things.  I've been working hard to learn to take a step back and I have to say I've been way better about it.
- July 21, 2022
Email ThisBlogThis!Share to TwitterShare to FacebookShare to Pinterest