What am I looking for in my relationships? 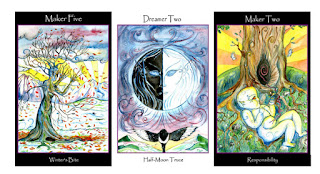 Dreamer Two is all about making decisions.  I want someone who knows what they want and goes after it.  I don't want someone who is purely a dreamer who thinks up great schemes, but never does the hard work required to make things happen.  John had great ideas, but he never had the grit and the gumption to bring them to fruition.  I need someone with grit and gumption who will actually follow through.

Maker Two echoes that theme in telling me I want someone who takes responsibility for their life.  Who is capable of owning their mistakes and who doesn't constantly blame others for their sorry state in life.

All of these cards are telling me that I want a grownup and not a little boy.
- February 26, 2018
Email ThisBlogThis!Share to TwitterShare to FacebookShare to Pinterest
Labels: Dreamer Two, Five of Pentacles, Maker Five, Maker Two, Shadow Work, Tarot of the Sidhe, Two of Pentacles, Two of Swords