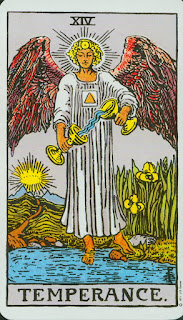 One of the best things about Tarot is that the cards are so multidimensional and can be read on so
many levels depending on the circumstances.  I got a first hand glimpse of that today when I pulled Temperance for my daily reading.

Since moving to Cleveland two years ago, I've struggled to make friends, in part because I work as a consultant and generally travel during the week and a lot of social activities are on week nights.  However, when I'm really honest with myself, I use work as an excuse to keep from meeting people because deep down I'm terrified of letting people in and being hurt.  However, the cards have been screaming at me for the last few years that I need to take down my shields and start letting people in.


When Temperance showed up in my reading today, I knew it was about achieving balance in my life by taking the various components of my life and adjusting them to find the right mix for me as what I'm doing right now isn't really working as I cycle between extrovert and introvert and I'm getting burned out.  During the week, I am in pure extrovert mode as I spend my days advising clients, doing presentations, and other extroverted work.  To counter that, I go into introvert mode when I'm at home and have no desire to interact with anyone other than my family.

Temperance is telling me I need to find a way to balance the introvert and the extrovert so that I have the emotional energy that I need to find friends and to build an emotionally satisfying life.  As I was pondering this and the usual excuses came to mind, my guides told me that I could have it all, I just had to let go of my all or nothing mentality.  As I pondered that, I realized they were telling me that I could sign up for book clubs even if I knew there was a chance I wouldn't be able to make some of the meetings.  No one is perfect and if I made the meetings I could, it would be enough.

Interestingly enough, Temperance provided another more immediate lesson today at the Dog Park.  The dogs were all happily running and playing when a man brought his trained attack English Shepard to the park.  The English Shepard started running and all the other dogs chased him thinking it was just a fun game.  However, anytime another dog came close to him, he growled and went for the dog's jugular.  One by one all the dogs ran away except for our dog, who thought it was still a game, until he got too close and the English Shepard went for his throat.  Luckily, Clark got away without serious injury, but he was pretty shaken up.

My daughter, Cam, went into Mama Bear mode and she got into the dog owner's face and told him he needed to take his dog and leave because his dog was attacking others.  He said the other dogs were attacking his dog, then went on a verbal attack.  My daughter refused to back down and it got ugly.  We, along with the few remaining pet parents, took our puppies into a fenced off area meant for smaller dogs, but the guy continued to yell insults.

We eventually left because it was too stressful to be around the toxic energy.  On the ride  home, we were both a little shaken, but we agreed that after the initial shock of such a negative encounter at a normally peaceful place, we both felt sorry for this man and his dog because they were both so filled with anger that they could not accept or experience friendship or love.  We both said a prayer for the man and his dog and thanked spirit for bringing him into our lives as a reminder that sometimes the best thing you can do is walk away.  It was right for Cam to speak her peace and remind this man that vicious dogs are not allowed at the dog park, but once it became clear he was not going to listen, we could choose to stay and escalate or leave.

In this instance, leaving was not giving up or giving in, it was choosing to walk away for our own peace of mind.  And the lesson from temperance goes back to the word's original meaning:  "moderation or self restraint" was that sometimes it is necessary to restrain our anger and our desire to have the last word in order to have peace.

All in all, it was a magical day that lived up to the meaning of temperance.
- April 07, 2018
Email ThisBlogThis!Share to TwitterShare to FacebookShare to Pinterest