Rebuilding My Faith One Cairn at a Time

Note:  This blog post has absolutely nothing to do with tarot, but it is an important lesson and I reference it in multiple blog posts.


It’s been an amazing couple of days and I’m sure I’ll write multiple blog posts about my amazing adventures in Arizona, but I want to spend some time writing about how a few simple cairns restored my faith and taught me that I don’t have to always have all the answers all at once.

I arrived in Arizona on Thursday, checked in to my beautiful room at the Doubletree, and spent some time wandering around Phoenix.  I really enjoyed sitting out in the warm air and just taking time to celebrate me.  Friday morning, I got up early and headed up to Sedona.  Driving through the desert was an amazing experience as the saguaros stood like silent sentinels along the road and the hues of red and orange filled me with energy.  Coming up on Sedona was like nothing I’d ever experienced as the rocks were almost pure red and the energy was this combination of peace and power like nothing I’d ever felt before.  I stopped at the first store I found in town to buy souvenirs, including a rock with a spiral carved on it, and to ask directions to Bell Rock.

Bell Rock is supposed to be one of the most powerful places in Sedona, but I have to be honest and say that I didn’t feel the energy at first.  However, I parked and walked down the first path I felt drawn to and then as I got closer to to Bell Rock, I felt the energy shift.  It was as if I was being called to sit upon the earth.  I found a niche in the rock and just sat there.  As I sat, I felt as if all the pain of the past year and a half was draining away.  I felt my anger, my despair, and my hopelessness drain away into the rock.  It was as if Mother Earth was embracing me and taking away all the pain and anger.  As the ick and the bad stuff drained away, I felt as if I was le[ with my true self.  I said a prayer and ask that I find the right path for me.  When I was done, I built a small rock cairn as a gift to the earth and started down the hill. 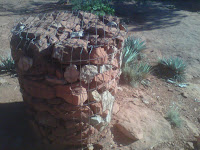 On the way back I lost my way and kept coming to dead ends where it was either a steep path up or a steep path down.  Finally, I made my way back to where I had built my cairn and asked my fellow hikers for guidance.  They pointed to a big pile of rocks encased in chicken wire and said to follow the cairns the rangers had placed on the path.  I could only see one cairn, but I faithfully made my way to that cairn.  Once I was at that cairn, I realized I could see the next one.  It continued that way until I was back within sight of the parking lot.

I realized from that experience, that I didn’t have to know every step of my path.  I had to look for the next right step and take it.  From there, I would be guided step by step through life.  That’s a difficult lesson for a control freak to handle, but an important one.
- November 06, 2011
Email ThisBlogThis!Share to TwitterShare to FacebookShare to Pinterest
Labels: Bell Rock, Cairn, Lessons
Location: Bell Rock, Arizona 86351, USA