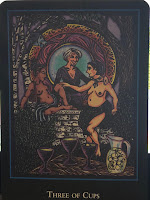 Guidance:  Enjoy the company of a few good friends, have a feast, indulge yourself, act from the heart to build relationships

Most three of cups cards have a sense of frivolity and fun as we see three women dancing and toasting.  This one has a deeper meaning as the women sitting topless indicating a willingness to be open and honest with one another and to be truthful about all things.  It is about letting go of our masks and getting real with the people we call friends.   It's about being able to share the uncomfortable things with people, the things we'd be embarrassed to tell anyone else, it's being able to cry without worrying about the snot coming out of your nose, and being able to laugh until you snort without being embarrassed.  And it's about being honest with people and knowing they won't give you advice unless you ask for it.

I grew up believing that friendship meant having people stick their nose in their business and give you unsolicited advice.  And unfortunately, that is all too often the way that friendship is portrayed today.  However, I learned about real friendship in Al-Anon where I learned that real friendship meant being able to just listen and witness someone's pain without rushing in to fix things.  One of the things I realized in being forced (as there are rules against unsolicited advice in Al-Anon) to keep my mouth shut when people poured their hearts out was that giving advice was more for me than for the people on the receiving end.  It is hard to sit and listen to someone who has a problem that you are convinced you have the solution for and keep quiet.  It is uncomfortable to silently witness people's pain.  However, I also learned from being the one pouring out my heart that there was something empowering about people not giving me unsolicited advice.  It meant that I was free to ask for advice, if I chose to, or figure it out myself.  The more I experienced this true unconditional love, the more I found myself wanting advice from people who had it together.  I also realized that unwelcome advice creates a power differential as the person giving the advice inevitably acts superior to the person on the receiving end.

As I discovered that type of relationship, I realized that the relationships of my childhood were unequal relationships where I was made to feel less than for not having all the answers or for not taking unsolicited advice.  My ex-husband was great at making me feel less than for not taking his advice.  What he didn't realize that even if I didn't take his advice, I often listened and considered it as I developed a plan of my own.  I don't have a lot of friends now as I'm still a hermit at heart, but I do have a few friends that I trust with my soul and it feels amazing to have people who love you and accept you for who you are.

Think about the people in your life, who do you love because they trust and empower you?
- May 25, 2019
Email ThisBlogThis!Share to TwitterShare to FacebookShare to Pinterest
Labels: cup, hermit, three of cups, World Spirit