The topic for this Blog Hop is Harvest, which is appropriate as it is Mabon.  Mabon is the second of the three harvest festivals with Lammas at the beginning of August being the first and Halloween or Samhain being the last.  Harvest has been on my mind lately as it was my word of the month for August was Harvest and my beginning of the month and end of month readings were about reaping what we sow and community.  I decided to do a deeper dive on those themes in this reading.

Interestingly as I was contemplating which deck to use for this reading, my DruidCraft deck insistently shouted at me, "Pick Me, Pick Me."  As this was my first tarot deck and one I haven't used in a while, I decided it was the perfect deck. 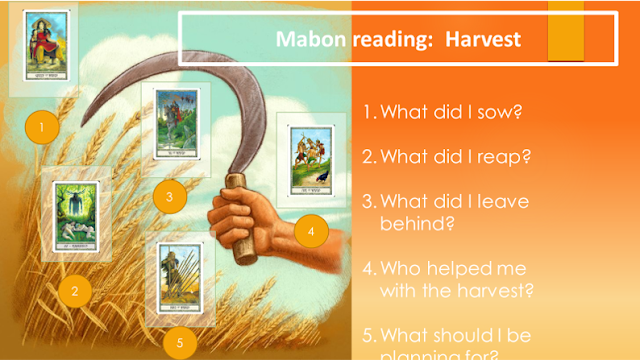 What did I sow?

At its most literal, sowing is planting seeds that may or may not grow.  However, I chose to look at the act of sowing as not only planting the seeds, but also the work done to make the field ready.  Using this definition, I sowed the desire to be strong, confident, and in-charge.  I have been working on recovering from the damage done to me by my mother and my ex-husband for several years and I've sent my intention to be bold, confident, and my own woman.  The Queen of Wands is also strong-willed and a good communicator.  I have always been strong willed, but it has taken me a while to have the confidence to go with that strong will.  I'm also a good communicator and I planted the seeds of having a situation that would challenge me and would help me to grow.  QOW reflects the me who went into this growing season, in essence what I sowed.

What did I reap?

The Six of Wands is all about victory, success, and leadership and I have reaped that this year.  I just left a job where I was being held back and not give the opportunities that allowed me to use all of my skills.  My new job is challenging and will allow me to use all the skills I have earned over my decades of work experience.  I'm being recognized as an expert and leader, which feels good.  However, the best part is that I recognize myself as a leader and I recognize that I was being underutilized.

For me, recognizing my abilities as a leader is more important than the external recognition because other people have recognized my leadership abilities for a while, but I've never really viewed myself as a leader.  I believe that comes from being raised by a father who believed that women weren't capable of being leaders and that women should not lead men.  It has taken a long time to retrain my brain to believe that women are strong and capable.

What did I leave behind?

In some decks, the devil is portrayed as evil or as all about lust.  However, in the DruidCraft deck, the card has been renamed Cernnunos and he is all about the life force and about learning to live in balance.  This card is about letting go of the obsessions that hold us back and about learning to live in harmony with nature.  For me, this card is about leaving behind materialism and a belief that money is what it's all about.  Money is one form of recognition, but it is not the only one.  One of the things I have been working on this year, is letting go of needing to buy things to make myself feel better.  I don't know if I have completely mastered those needs, but I have stopped spending so much.

Who helped me with the harvest?

The nine of wands is about fighting battles and standing strong against adversity.  This card seems to indicate that I fought my battles alone.  However, as I mediate on the question and the card, I realize that the card is telling me that my adversaries and those I fought against / disagreed with helped me with this harvest.  My ex-boss who was a horrible leader held up a mirror and helped me realize that I do have leadership skills.  My ex-coworker who droned on and on and had to insert herself into everything, helped me to realize the importance of boundaries.  That skill has served me well as I've jumped into a new situation where here are processes.  I'm realizing that it is in my best interest to stay in my lane.

If I look back further, I realize that that my ex-husband and my mother also taught me lessons in perseverance and being strong in the face of adversity as they put me down and challenged me at every turn.  Although there are times, it feels like their abuse broke me, the opposite is actually true as it made me stronger and helped me to realize that I am more than what other people say about me.

What should I be planning for?

On the surface, the five of wands would suggest that I need to plan for conflict and in the past that would have meant that I put my shields up and prepared to do battle with everything I have.  However, this card can also be read about protesting the status quo and about persevering in spite of obstacles.  As I reflect on this card, I believe the meaning is that I need to plan to use my diplomatic skills as things may get a little heated as we head towards the next move groups.  And that I need to persevere no matter what the obstacles.

The other message in this card comes from the rooster who is just going about his business and ignoring the people fighting.  This tells me that I need to maintain my boundaries and not jump into battles that do not concern me.  I do not need to be the center of attention and I do not need to give my opinion on everything.  Sometimes, I just need to sit back and mind my own business.

What is not reflected directly in this reading is how much I have grown as a tarot reader.  When I first started reading with this deck, about 12 years ago, I went strictly by the book and I didn't use my intuition.  When I first started reading, I would have never read this five of wands from the rooster's perspective and came up with the need to mind my own business and stay out of battles that aren't mine.

- September 22, 2022
Email ThisBlogThis!Share to TwitterShare to FacebookShare to Pinterest