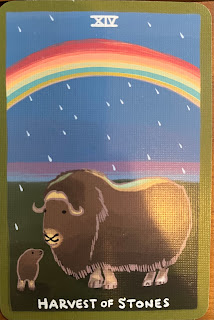 First Impressions:  This is a happy card as the rainbow signifies both beginnings and endings and happiness.

Book:  I know success because I embody and create success.

Guidance:   Have faith in yourself

I love this reminder to have faith in myself.  This is something that I've struggled with especially as a woman.  All too often there is a belief or tendency to set aside my own beliefs and buy into the belief that men know better.  I am leaning to not do that and to trust myself no matter what.

However, part of having confidence and learning to trust myself is learning to listen to others and not be so stubborn that I close out good ideas just because they weren't mine.  Confidence is also learning to let go of the need to be territorial.  I've always been territorial and wanted to have hard boundaries instead of porous ones that can mutate as need be.  That's one lesson I need to take to heart at PPl as boundaries and being territorial will not get me very far.

Where I'm At:  I'm at home today.  I had a mostly productive day at work, but Sean is driving me nuts.  There is no respect for my working at home and he knocks or lets Wendy in.  It's extremely annoying.

Weather:  It was an absolutely beautiful day outside.  The temperature did not get too hot and it was a very clear day. 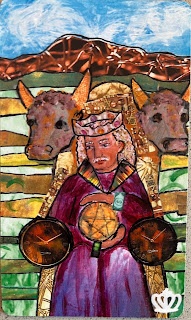 First Impressions:  It is so funny that there are cows on this card, because I was looking for cows yesterday so I could take pictures and make Cam happy and I found them.

Guidance:  Wrapped in protection and dedication

I love the concept of egoless pride as that means I can take pride in who I am and what I've accomplished without feeling like I am better than anyone else.  Ego is a big part of who I have been this year and I think in part that is because I continually feel that I am under attack and have to defend who I am and the value I bring to the table.  However, in reality there is no need to defend who I am.  The Evil M and he Clueless T are not my bosses and I don't need to defend myself to them.  They are who hey are and eventually they will trip themselves up.  I need to focus on taking pride in who i am and what I bring to the table.

It's odd that although this card is about practicality, it is also a little bit about magic because those hills

and those cows sure look like the cows that I encountered today.  I also saw a seal playing in the harbor and that was absolutely magical.

Where:   I am in Windsor, California today and it has been an absolutely magical day.  I had never driven north on Route 1 today and it was amazing.  It was twisty and curvy and there were magical glimpses of the water around mysterious curves.  I also saw lots of cows and took pictures for Cam.  And I saw a playful seal at the Bodega Bay restaurant that I stopped at.  In another amazing bit of serendipity, I met a woman at dinner who seemed intent on telling me that she had met someone when she wasn't looking.  She was an older woman who lived in Napa and her husband had died 2 years ago, but she'd met someone else and was happy.  It was one of those weird coincidences, but I think she had a message that I needed to hear.  I'm not sure if it was about meeting someone or not giving up hope.  At heart, I'm going to take it as just be open to what life has to offer.

Weather:  It was one of those absolutely perfect California days.  There was a little bit of a chill in the air, especially around the water, but the sun was so warm and it just felt perfect. 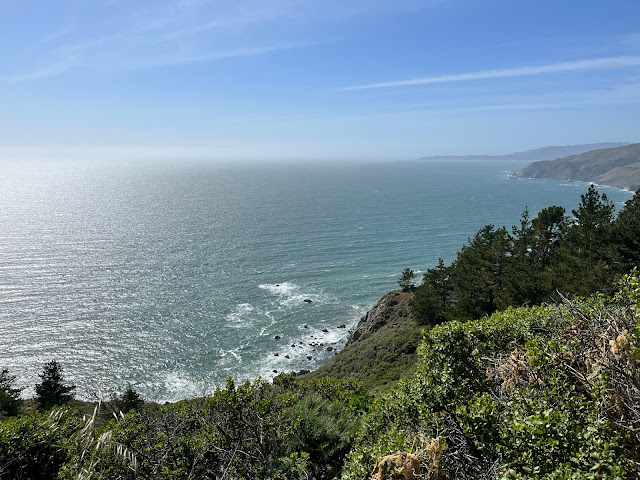 December 7, 2016
Deck:  Gilded Tarot
First Impressions:  This king is so much more casual than some other versions of the King of Pents.  he is lounging as if he is a man who knows his own importance and isn't afraid to be himself.  The king of pents is clearly the master of his domain.

Book: Enjoy the finer things in life, working hard for what you have, wanting to set aside responsibility, not satisfied by the good life, sharing what he has.

Guidance:  Welcome change and innovation, you've earned what you have

Interesting that s I'm sitting looking over the city, I'm lonely.  It feels as if I have everything I need or desire, but it doesn't mean anything.

It's been over a year since I pulled that card and my perspective has changed so much.  Although I still want someone in my life, I'm better able to appreciate what I have and the person I've become.  I think a big part of my problem was that I didn't think I should be comfortable being alone and I didn't think I should be proud of my accomplishments.  My parents raised me to believe I was nothing without a man and John reinforced that by being jealous of who I was and what I had accomplished.  He was continually trying to bring me down a notch and it became easier to just be "less than" than to deal with his drama.  What I've learned is that it really is/was his drama.  He was the one that felt inadequate.  It was nothing that I did.  It was all about his inadequacies.  I don't and can't own them.

The funny thing is that the word that keeps coming up for me is Fierce.  I feel fierce when I manage all the different aspects of my life.  I feel fierce when I kick butt and take names.  I'm learning that sometimes you just need to be direct and tell people what to do.  It still feels really uncomfortable for me, but I know it is what needs to be done.
- September 20, 2022
Email ThisBlogThis!Share to TwitterShare to FacebookShare to Pinterest