The Evil M is someone at work that I cannot stand.  She is a braggart and a blowhard and she has to take over every single conversation.  She makes absolutely everything about her.  And she is bugging me today because B decided that she should be G's delegate.  The truth of the matter is that I really don't care who is the delegate, but I do care that the Evil M lords it over everyone and since Glenn is out she seems to think she is in charge and that wasn't what he told us.  She is an impossibly horrible woman, but I also have learned that people who are impossible are usually the ones who have the most to teach us. 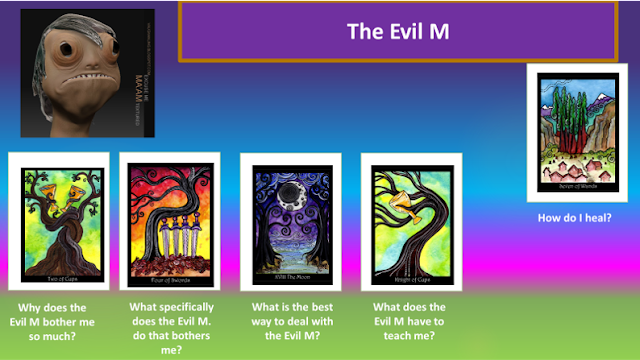 Why does the Evil M bother me so much?

The two of cups, which is usually about love and relationships, is an odd card to pull here.  However, I believe the card is telling me that the Evil M bothers me so much because she is my evil mirror and that is true in so many ways.  In the past, I have always had to insert my opinion into the conversation because I wanted to be the center of attention.  I believe she really does have main character syndrome as she has to talk longer than anyone else, she has to insert herself no matter what even if it is weird.  For instance, I wanted to give someone praise as they had dome something awesome.  And as soon as i was done, Evil M had to give me praise for handling something.  She always has to draw attention to herself.
A lot of why she bothers me is that there have been a lot of times in the past, and even recently, where I have felt as if I would disappear if I did not have attention.  I also guess that I should be flattered that she views me as such a threat.  She doesn't treat others the same shitty way that she treats me so I guess that I am the only one she sees as a threat.
What specifically does the Evil M do that bothers me?

She bothers me because I have worked really hard to get where I am and I have significantly more experience than she does.  However, instead of respecting me and listening to me, she always has to one up me.  She always has to act as if I have to follow her lead.  And the truth of the matter is that she is not my boss and I do not have to follow her lead.  She is actually a pretty shitty boss because she doesn't know how to read the room and she wants to overtake and drive even when she is not the boss.
What is the best way to deal with the Evil M?

The Watery Moon tells me to go with the flow and to let whatever garbage she said roll off me, I shouldn't take what she says to heart because she is an idiot and as my boss says I need to let her fail.  Unless my boss tells me that I need to do what she says, I'm just going to ignore her.  The other thing that the moon tells me is to not let her impact my peace and spirituality.  I let her get under my skin and that disrupts my flow and my spiritual side.  At the end of the day, she is nothing to me and I need to just let her go.  It is actually pretty easy to tune her stupid prattle out.  I just need to continue to do that and to tune into my own spiritual side and let her garbage go.
What does the Evil M have to teach me?

I love this card because it is about creating boundaries and standing up for what is right.  There are a number of things that I can do to heal from the Evil M's bullshit.  The first is to put up boundaries so that I don't have to interact with her any more than necessary.  I'm going to ask her for contacts for her projects and set up my OCM meetings.  I'm not going to attend any of her stupid meetings where she wants to just talk for hours on end.  And I am going to track all the bullshit that she does while Glenn is gone that I witness and let him know that she overstepped her bounds while he was out.  Those are concrete actions that I can take to overcome the Evil m.

- July 02, 2022
Email ThisBlogThis!Share to TwitterShare to FacebookShare to Pinterest