2018 Shadow Work:  Day 1
I originally did this series of Shadow Work Questions in 2018 and it is feeling like it is time to revisit this work. 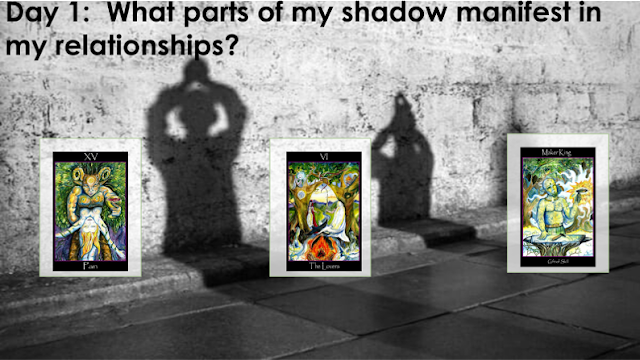 Pan is indulgence and obsession and historically I have become addicted to other people and felt I could not live without them.  I have become so much better about standing on my own two feet and being my own person, but I also feel like Pan shows up when we constantly want approval from other people.  My feelings get hurt if other people don't want to be my friend so there is still some of that obsession there.  However, sometimes I don't think I am a very good friend as sometimes I view people as problems to be solved instead of people with their own wants and desires.
I'm still a work in process when it comes to my codependent personality and there are days when I think it would be beneficial to go back to program, but I also feel like I've moved beyond program and I have integrated so many healing modalities into my life that it would be hard to go back to just program.

Historically, I've lost myself in love.  I know in my marriage, I became less than so that John would continue to love me.  I haven't really understood that marriage should be a partnership of equals.   The relationships that have been modeled for me throughout my life have been of a dominate party and a subordinate party and there was no way in hell that I was going to be subordinate to anyone.  I carried that attitude into my marriage and at the first sign that John wanted to be my equal, I fought back.  I had no clue how to be an equal in a relationship because that was never modeled for me.
I have become much better about approaching relationships with people from a perspective of equality, but I haven't been in  relationship since my marriage and I honestly don't know how I would react.  I think I have grown and matured and would be better able to come to the table as someone's equal, but I honestly don't know.

This is another card that has historically implications for me as in the past I have thought that I could buy people's friendship by making or buying them things.  That has been another way that my low self esteem has come into play as I haven't thought that I wasn't worthy of being liked just for myself and that people would only like me for what I could do for them or buy them.
This, unfortunately, is another relic of growing up under Charlene.  She taught me that my only value was what I could do for others.  Everything was always a reflection on her and I was never valued for who I was.  In reality, my mother never understood me.  She never understood that I was smart and driven and that I was always going to be capable of taking care of myself.
The other way to read this card is that because I am capable of taking care of myself, I don't have a need to be interdependent with other people.  I've periodically thought about what a relationship would look like now that I have become more independent and the truth is that I don't know.  I honestly don't think I ever want to lie with someone every again.  I like my independence.
- July 30, 2022
Email ThisBlogThis!Share to TwitterShare to FacebookShare to Pinterest