If you've never done a hop before, click on previous to go to the previous post in the hop, master list to see all the hoppers, and next to move to the next post.

Our fearless wrangler, Jay Cassels, gave us the assignment of contemplating unseen traditions or symbols of protection.  One of the things that has always fascinated me about the tarot is how the cards speak to each artist separately and how they incorporate various symbols in their cards. 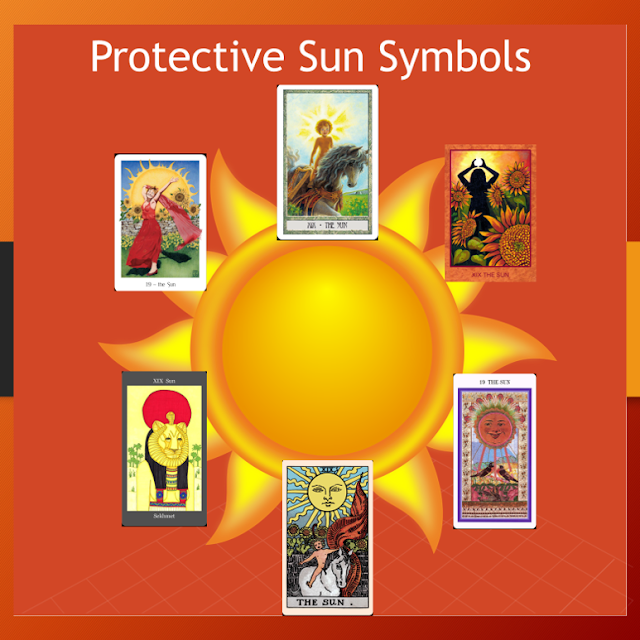 RWS--The original RWS card has several protective symbols built in including the sun, the child, the nakedness of the child, and the horse.  These symbols are replicated in some of the other cards analyzed here, but I'll cover those elements here and focus on the unique elements shown in the other cards.  The Sun itself is a protective element because without the sun, life would not be possible on earth.  The sun is also a symbol of positivity and happiness, both of which can protect our mental health.  The child is a symbol of innocence, which for me is a symbol of letting go of my knowledge of all the bad stuff in life and continuing to go on.  That might be cockeyed optimism, but I believe that all too often we focus on the negative and not the positive and focusing on the negative makes it hard to be hopeful.

The nakedness of the child is symbol of openness and not having secrets.  There is a saying in program (12 step programs) that you are only as sick as your secrets and I have found that to be true in my own life.  When I am worried about what people will think if they find out about things in my past, I can't truly be free and healthy as I am so busy worrying about what people think that I can't focus on healing me.  Being open and honest helps me to be the best me I can be.  The white horse is a symbol of the goddess and the protection she offers and also of our own strength and ability to move forward.

Dark Goddess Tarot:  The Sun card in the Dark Goddess Tarot is Sekhmet and she is a protective force in and of herself.  Sekhmet has tremendous power and she was the protector of the pharaohs and led them in warfare against their enemies.  She is also the patron of healers and helps protect people against disease and pestilence.  However, Sekhmet also has a dark side and a bloodlust that can be  uncontrollable.  As I meditate on Sekhmet, one of the lessons I take away is that there comes a time to let your guard down.  One cannot be in protection mode 24/7 as it will wear on a person and they will start to be overly anxious.  Even Sekhmet has to take time to have a beer, sit back, and relax.  This card is also full of yellow which is the color of joy, happiness, and enlightenment, which are all emotions that can protect us from our own bad moods.

Gaian Tarot--The Gaian Tarot's Sun Card is one of the most joyous sun cards as it depicts a woman dancing with joy.  Her eyes are closed, her face is turned upward to the sun, and her arms are lifted in pure exuberance.  Joy itself is a protective factor as people who are joyful have a more positive outlook in life and are more likely to see the positive in the world around them.  They are also more likely to smile, which calms the nervous system, and laugh, which sends endorphins coursing through the body.  Laughter can also protect the body as it can lower blood pressure and and reduce stress.  In addition, her dress and wrap contain spirals which are symbols of life, creation, rebirth, and awareness.  Although these concepts are not protective in their own right, creating can help bring us joy as there is a wonder in creating something new.  Rebirth can help us let go of things that are holding us back and move on into something wonderful.

Druidcraft Tarot--The Druidcraft Tarot was my very first tarot deck and I still love the rich imagery.  The Sun card contains many of the same elements of the original RWS deck including a naked child on horseback. I went into the Sun and the nakedness on the RWS card, but I wanted to explore some of the more unique symbols on this card.  As it is summer, the bees are sucking up the nectar of the St. John's Wort.  Although they are small, the work the bees do protects our entire world.  Without their hard work of pollinating, we would have nothing to eat.  St. John's Wort also is a heavily protective symbol as it is believed to be able to drive away evil spirits and demons.  Additionally, St. John's Wort has also been proven to help people suffering from depression, which could be said to be protective as it drives away the mental anguish people feel.  The harp can also be considered a protective symbol as the Ancient Greeks believed that the harp allayed anger.  Reducing anger can protect both the person who is angry by calming them and helping them think more rationally and the person they are angry with.

Tarot de St. Croix--This is one of my all time favorite decks and I always feel happy when I work with this deck.  This card is also about the warm and protective energy of the sun, but it is also about the stored energy of the sun in the form of the sunflowers.  The sunflowers absorb the energy of the sun and that energy becomes food for animals.  The sunflower also regenerates itself when the seeds drop and grow again the next year.
The figure is also pointed in silhouette as a way of illustrating the wholeness of an individual and a reminder that we need the dark as well as the light.  Understanding our own darkness is protective as when we take the time to understand our darkness, we become more whole.  It also allows us to work through our challenges and live richer and fuller lives.

The Enchanted Tarot--This is a new deck for me, but I loved the birds basking in the sun's glow and although they are not specifically called out as robins, they look like robins to me and robins are symbols of spring.  Although I know robins are around all year round, there is still something special about seeing them in the last cold days of winter as spring is in the air.  For me robins are harbingers of hope and a reminder that we can endure the coldness of winter and come out in the warmth of spring.  Hope is protective as it is a reminder that we will endure and that things will get better.
Summary
This was an interesting experiment as it brought up things I hadn't associated with the Sun before such as hope and openness.  I know there are probably millions of tarot decks out there and I'm sure there is a lot of other protective symbolism in other decks, but I hope this gave you something to think about.
Previous | Master List | Next
- June 21, 2022
Email ThisBlogThis!Share to TwitterShare to FacebookShare to Pinterest