I was abused physically and emotionally during my marriage.  John would hit me, he put my head through a wall, and he beat me with a baseball bat in the last months of my marriage.  The worst was the emotional abuse as he would degrade me, call me names, and gaslight me.  I'd thought I had processed it all and was healing.  However, then I had a dream.

We were in a little country diner and it was when I was still married to John.  He was having lunch with what I thought was a friend and I had not seen him for a while as he was staying with someone else.  I was excited and came in and sat beside him.  He elbowed me off the bench and said something about not wanting to see my fat ass.  He was incredibly cruel (like he usually is) and made a comment to the person he was with about me being a piece of shit and not worthy of his time.  I was so embarrassed.

However, then the amazing part came in.  The waitress came over and asked if I was okay.  She also took me to the owner of the place out of sight of John.  The owner told me that his behavior wasn't okay and that she'd gotten a text from the person he was sitting with, who happened to be the sheriff, saying it wasn't okay and that she was to find out what I needed to be safe.  As soon as that happened, John would be kicked out of town and never allowed back in.  I was floored.  I told her that I couldn't leave the house because the mortgage was in my name, etc.  I was also afraid that even though he apparently didn't want me, that he would still hurt me because I was just a think to him.  She helped me find a realtor and a mortgage to get out of the house.  And helped me find a safe place to stay.

After the dream, I realized I still had some work to do so I pulled some cards. 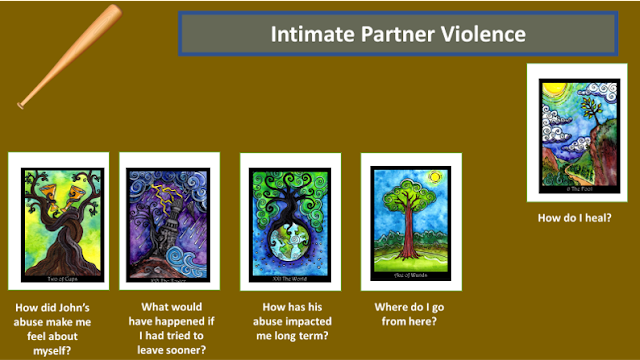 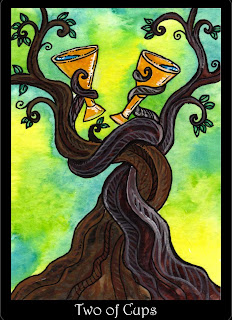 How did John’s abuse make me feel about myself?

The two of cups is about love and trust, but this card flags the opposite for me in this reading.  His abuse made me feel that I was failing in the most important relationship in my life and that I was unworthy of the love.  The person I had chosen to share my life was abusing me and because I had grown up in a dysfunctional family where I had been taught that love hurts, I thought I deserved his abuse.  I thought there was something inherently unworthy in me that no one would love me and that I really was the worthless piece of shit that he kept telling me that I was.  I also knew that if I had left, I would have had no where to go.  Charlene would have told me to go back to him as she didn't believe in divorce.

The ironic thing is that I was always strong enough to be my own person, I just had been brainwashed by the dysfunctional bitch who raised me to believe I was worthless.  I am beautiful and worthy of love just for being who I am.  John didn't treat me with love and respect because as he told me when we were splitting up, he wanted to take me down a few pegs.  The thing is that he always got on me for not dressing up, not wearing makeup, etc.  However, what he failed to realize is that there was no way I could take pride in who I was when someone was continually beating me down.

What would have happened if I had tried to leave sooner? 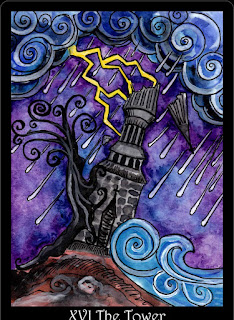 There were times in my marriage when I really wanted to leave, but he manipulated me into staying.  I also was afraid to leave because I did not want to put the kids into a worse situation.  The Tower tells me that I was right to stay because if I had left, the world would have come down around my ears.  The most dangerous time for a woman is when she has decided to leave her abusive partner and this card confirms that my instincts were right.  If I had tried to leave before the kids were safely out of the house and on their own, he would have killed me or killed them to hurt me.  Even though life with him was hell, the kids or I could have died if we had tried to leave before.
I know this is true because of comments and things he said as I was leaving.  First he tried to kill me with a baseball bat.  Secondly, he viewed me as a possession because he was so upset when I told him I was changing my last name.  Even though he was divorcing me, he expected me to keep his last name.  Additionally, he got so upset when I was giving away some mugs he had given me.  I'm not sure what he expected, but why someone be so upset that someone they were kicking out wanted to get rid of something? 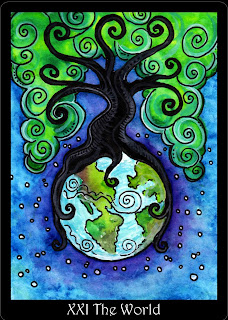 How has his abuse impacted me long term?
The world tells me that his abuse has skewed my world view and it changed me in ways that I may not yet understand.  It has made me view the world as a scary place where everyone is out to get me.  It has also made me believe that I am worthless and not worthy of love or consideration.  However, that is not true as my dream showed me the other night.  I am worth of love and I am worthy of having good things and good experiences in my life.  My negative feelings are compounded right now by all the negativity and hate in the world.  It is hard for me to believe that there is safety in the world.
However, drawing this card is also a reminder that the world can be a good place to be and that I deserve a new beginning.  I deserve love, laughter, and happiness.
Where do I go from here? 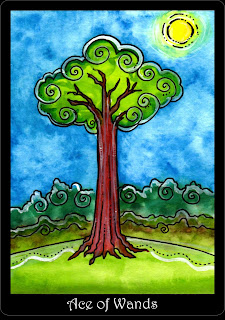 The first message I get from the Ace of Wands is that I go straight up.  I don't need to bend or bow to anyone ever again.  I am a worthy person and I deserve love and respect.  I don't need to bow to anyone ever again.  This card is about creativity and inspiration so it is time for me to leave hiding my light behind and to stand tall and inspire people.  I think one of the worst things about John's abuse was that I constantly felt that I had to hide my goodness, hide my intelligence, and hide who I really was.  He could not stand that I had more ambition than he did and that I was able to challenge that ambition into actual results.
Sean's graduation was so emblematic of who John is at his core.  He's standing here watching his son get his diploma after going back to school and instead of being happy and proud of him, all John can think about is that he doesn't have a degree because no one gave him the opportunity.  That is so much bullcock because I was going to pay for his school until he treated me like shit and was going to leave me home alone every night after I worked all day.  He could have gotten tuition assistance from Standard Parking.  Or he could have taken out loans, but instead he had to be a victim.  His whole mentality is being a victim.  I was so proud of Sean on that day because I knew it took grit to go back to school, but instead of celebrating Sean, all John could do is be a victim. 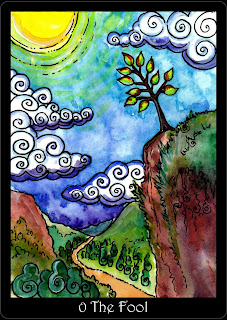 How do I heal?
The Fool tells me that it is time for me to open my heart and trust again.  It is time for me to realize that the world is not such a big bad and scary place and, even if it is, there are good people in the world who are trustworthy.  It is time for me to let go of all that is holding me back and live my life as the beautiful, funny, successful, and amazing women that I am.  I know that I will stumble and fall, but I have proven to myself time and time again that I am capable of getting back up.
Conclusion
Like all readings I've gotten from this deck, this one was intense and it helped me to see that what my intuition has been telling me all along is right.  I do deserve to be loved.
- April 24, 2022
Email ThisBlogThis!Share to TwitterShare to FacebookShare to Pinterest