Our fearless wrangler, Bonnie Juettner Fernandes, invited us to explore Easter Eggs and the surprises that they can bring.  I decided to ask the cards about the biggest surprise in my life.  One of my key philosophies around tarot is that once laid the cards are played, which means I don't question either the questions I asked or the cards pulled.  This reading was way more personal than I would have liked, but it provided me valuable insights into myself and my life so I've published it for public consumption.  And if this post helps even one person realize they are in a bad situation, I'll consider it my good deed for the day. 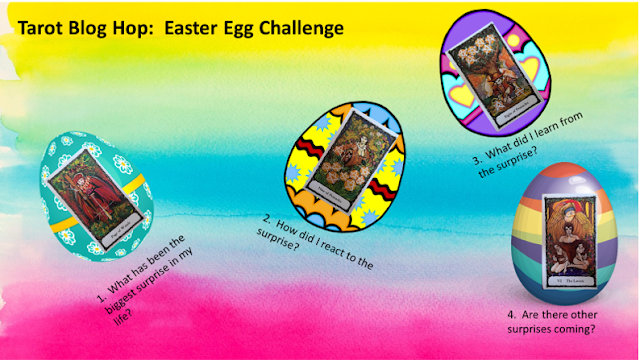 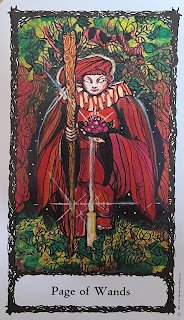 What has been the biggest surprise of my life?

The Page of Wands from Sacred Rose Tarot tells me that the biggest surprise is about a lover or friend and upon reflection I realize that my biggest surprise goes back 30 some years to the man I married.  He said all the right things:  he wanted to be my partner, he expected to walk side by side with me, he didn't want me to just be a wife and mother.  However, after the ring was on my finger, I realized that I had married someone who was hopelessly immature and incapable of a real adult relationship.  He quit jobs on a whim without another one lined up, he refused to contribute either by taking care of the house or working, and the biggest surprise of all was that he was abusive.  I had never been exposed to intimate partner violence before and I honestly believed his gaslighting that it was my fault and that if I didn't push so hard, he wouldn't hit me.  However, in hindsight my "demands" were not unrealistic as I simply expected him to contribute to the household by either working or by doing the housework while I worked.

I've also realized that there were clues as when I was offered a job in Japan, he wanted me to turn it down so he could support us on his salary as a hospital dishwasher.  That would have ended my family in poverty and that didn't work for me.  My decisions were the right ones in hindsight, but it took me a long time to understand that. 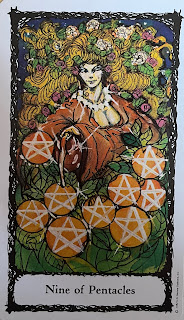 How did I react to the surprise?
I reacted by becoming an independent woman who was quite capable of supporting herself similar to the Nine of Pentacles.   I didn't set out to become that woman because I always expected to have a partner who truly stood by my side, but that was not my reality.  I learned early in my marriage that if things were going to get done, I needed to do them myself.  Once our first child came along, my focus shifted to providing for our son and making sure he had what he needed.  There is a certain loneliness in realizing you need to be the sole support of your family as the person you chose to marry cannot or will not step up to the plate.  However, there is also empowerment in finding your strength and realizing that you need to do whatever it takes to provide for children who cannot support themselves.

The downside of becoming an independent woman is that I took high paying jobs that required I travel and my children suffered for it.  He became angry and resentful that I had good jobs while he was working menial labor.  What he did not realize is that I had those good jobs because I had grit and I stuck to work and didn't walk out when things got tough or someone was mean to me at work.  I knew that I had a responsibility to support my family and I did whatever it took.  My children were hurt in the process, but in the 12 years since my ex and I have been divorced we have all been working on healing and we now live in functional household full of love and a lot of laughter. 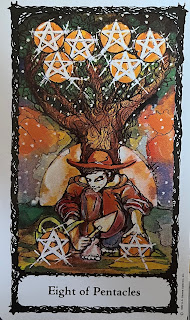 What did I learn from the surprise?

I learned that my hard work has rewards that go beyond the financial.  While being self-supporting was the primary reward from my surprise, I also learned that I am more capable than I had thought.  My now ex-husband gaslit me throughout our marriage and he told me that I only got my jobs because my parents had paid for my college education.  He denigrated my abilities, my femininity, and anything else he could denigrate and I bought into it all.  Part of the reason that I was susceptible to his abuse was that my mother had raised me to believe that all I was good for was to take care of a man.  She did not believe that women should be independent.  She was also a victim of my grandmother's physical and emotional abuse and no matter how badly my grandmother treated my mom, she kept going back.  It was from this that I learned that if you "love" someone you have to accept their abuse.

I've also learned that I don't have to be perfect as a parent, but I do need to be loving and kind and willing to make amends for my mistakes.  That is quite the opposite from the lesson I learned from my mother and from my ex-husband which was that you can abuse people and never say you're sorry.  Although I would not wish my experiences on anyone, I learned very valuable lessons.

Are there other surprises coming? 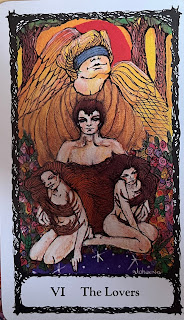 The Lovers card indicates that there will be choices in my future and that I am the only one who can make the decision.  While on the surface this card is about lovers, in reality it is about choosing between two options.  In this card, the "good" option is represented by the demure Eve and the "bad" option is represented by the more independently minded Lilith.  I will be honest and say that the description of this card gave me heartburn as Lilith symbolized evil when I know her to be an independent goddess.  I have no clue what surprises might be coming, but I guess if I knew it would not be a surprise.

I have to be honest when I designed this spread, I thought the cards would tell me about a surprise that was happy and lighthearted and represented the Easter Egg background I chose for the spread.  However, the cards chose to take me down a darker path.  Additionally, even though I was late posting, I seriously reconsidered this spread and thought about posing more lighthearted choices. However, when I checked the copyright of the book to see what the patriarchal garbage about Lilith was written, I found that this deck was published in 1988:  the year I married the Page of Wands.  I took that as a sign that this is the post I was meant to make.

- March 20, 2022
Email ThisBlogThis!Share to TwitterShare to FacebookShare to Pinterest