Tarot Trauma: What is my parent's trauma?

I've written about my mother's trauma and my father's trauma, but I thought it would be interesting to read on their trauma as a couple.  My parent's met in 1964 in South Elgin, IL.  My father had moved to the area because his aunt, uncle, and cousin had moved there and there were jobs in the area.  At the time they met he was working at Howell's a chair manufacturer and my mother was working at a diner.  He came in, they met, and started dating.  He was 28 and she was 18.  At the time such an age gap was not as big of deal as it might have been today.

They got married in February 1965 and bought a house in Valley View.  It was a small one bedroom house with a closed in porch.  I was born in November 1966 and my brother was born in July 1970.  By all accounts we were a normal and happy family, except for my mother's crazy family.  My father went to work at General Mills several years after I was born and worked there until he retired.  Shortly after they got married, they got a small dog named Spotty, but when I was five some teenagers killed Spotty.

We lived in Valley View until I was ready to go to Middle School and we moved because my parents didn't want me in St. Charles schools as they believed there was a drug problem there.  They moved out to Maple Park and my father's commute became significantly longer.  To be honest, I don't know how he commuted an hour each way very day, but he did it because he loved his family.  They lived in Maple Park until my dad retired, then they moved out to Mt. Carroll.  My dad died in 2008 and my mom still lives in Mt Carroll. 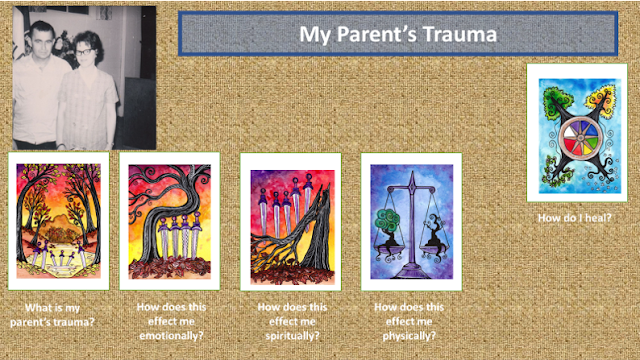 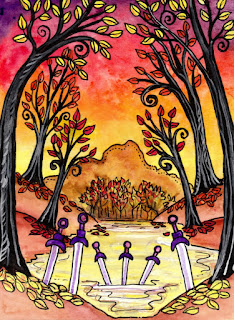 What is my parent's trauma?

The six of swords tells me that my parent's trauma is that they never grew as people, but stayed stuck where they were because they got married and had bills and responsibilities.  My father was stuck being the breadwinner and working a zillion hours and never had the time and energy to pursue writing or his other dreams.  And my mother took classes and wanted to pursue outside interests, but she was trapped being a housewife.  Additionally, a lot of the times we only had one car so she was stuck at home.

As a child, I didn't think of my parents as being stuck in a rut or incapable of moving on, but in retrospect, I can see how they both wanted so much more out of live, but weren't able to pursue it because the money went to raising the kids.  It is such a common trap for people to fall into, but it makes me sad.

One of the reasons that I work so hard to become someone other than a wage slave is that I don't want to live my whole life regretting what I wasn't able to do.  My dad never seemed to be resentful of us and I never got the sense we held him back, but in retrospect we did.  I feel the same kind of stuckness as it feels I will never get out from under the bills an be able to live my own life.

This card is also interesting because the more traditional meaning of the six of swords is traveling and moving behind being stuck.  My dad loved to travel and he always wanted to see Alaska someday.  It makes me sad that he never realized that dream.

How does this effect me emotionally? 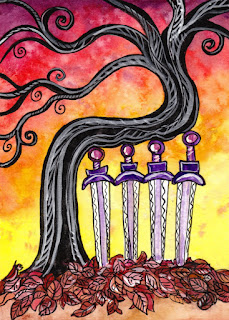 The four of swords is an interesting card to draw here as it tells me that I can rest for the moment and that I'm through the storm and am safe now.  I read that to mean that I have processed the damage my parents did from an emotional perspective and that I can look back on what I learned and reflect on it.  I'm not continuing to be harmed.  That seems apt to me as I have done a heck of a lot of work on healing from my parent's trauma.  However, this card also means that there might be more headwinds and trauma in the future.

When I look at this card from purely a visual perspective, I feel that who I am emotionally is reflective of what I went through and learned and that I am growing away from that trauma.  It happened for a reason and now I can move forward and continue to grow. 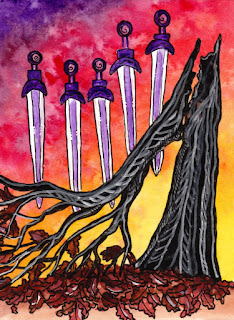 How does this effect my spiritually?

Unlike the four of swords which says I am growing from what I experienced, the five of swords tells me that the trauma of my parents is continuing to weigh me down and adversely impact me.  The dysfunctional religion of my parents has broken me and impacted me in ways that I don't even know if I am aware of yet.  My father's spirituality was patriarchal and he drug my mother into it.  I don't think he realized that the religion he practiced was not the true religion of Jesus Christ, instead it was a religion concocted in part by the Catholic Church.  It was the Catholic Church who concocted the myths that women were second class citizens, it was the Catholic Church that concocted the myth that anyone who wasn't saved would go to hell.

That is an interesting read for me as it represents a break down and stabbing in the back.  I guess when I look at it, that is what Christianity  done, it has broken my faith in its crappy belief system and stabbed me in the back.  I question why anyone would call themselves a Christian and if someone does, I don't trust them.

How does this effect my physically?

I'm not 100% sure how to read this card in terms of how this impacts me physically.  As I meditate on this card and the meaning from the book, I think Justice is telling me that I get to choose how to treat my body.  I can choose to do the right thing and eat healthy or I can choose to overeat.  Much of my body image and behavior is driven by my parents.  My father and his archaic beliefs taught me to be ashamed of my body and to believe that it was my responsibility to cover up.  I remember when I was going off to college and I bought a swimsuit that made me look awesome.  It was a one piece and had buttons on the side and my cousin, aunt, and father, said that I shouldn't let my grandmother see it.  My father was also against bikinis.  I never understood why as they showed off strong and healthy bodies.

My mother also warped my view of my body as she constantly complained about being fat, but then sucked down sugar and candy.  I think that is where I learned to think I was helpless about how my body looked, but that's not true.  There are always choices to be made and even if part of my weight is based on biology, not eating sugar will still help me be healthier. 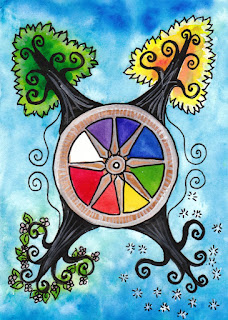 I recognize that who my parents were was partly the luck of the draw and that there choices had a karmic impact on who I grew up to be.  There is nothing that I can do to change that luck of the draw, but I do need to take responsibility for my own life and choices.  I can recognize how my parent's trauma impacted me and take concrete steps to heal from it.  However, I do think it is important to step back and look at the pattern of their lives and look at how I was impacted, because knowledge is power.

The other lesson of this card is that we are all a product of our circumstances, including my father.  I don't think he deliberately set out to be cruel or to treat me as a second class citizen, but he absorbed the beliefs of his parents and his circumstances.   The sticky thing about believing that is that if I believe that for my father, I also have to give my mother the same grace and understand that she is also a product of her circumstances.  That is harder for me, because while the pain my father caused was covert and I didn't even realize how I was being hurt at the time, the pain she caused was overt and in my face.  It is difficult for me to accept that she was that rude and hateful and was unaware that she was being rude and hateful.

- February 27, 2022
Email ThisBlogThis!Share to TwitterShare to FacebookShare to Pinterest