Trauma is a funny thing as the effects of it pop up in strange ways.  It can mean a cluttered house as a defense mechanism, it can be shutting people out because you are afraid to get hurt, and it can mean flashbacks and other terrors.  I've spent a lot of time working to heal from the trauma in my past, but trauma is generational and I am still being impacted by trauma that happened before I was born.  I've decided that this is the year I explore and work to heal from generational trauma.  I'm not sure where this journey will take me, but I do know that there will be tears and revelations.

My mother grew up the daughter of a farmer and a factory worker.  Her family moved a lot as a child and she lived in Michigan and Wisconsin.  She was the second child of the family and her older brother was an abuser as he tried to kill her at least twice that I know of.  Her mother chose to ignore her brother's abuse as he was the golden child.  My grandmother also abused my mother at least emotionally.

My mother tried to be a good parent and I never wanted for food, clothes, or things that I needed.  However, she did not know how to love and she also believed that as the parent she had the right to unconditional respect.  She thinks that she can dictate how I live my life, even as an adult.  And she believes that everything I do reflects on and revolves around her.  When I was a sophomore in college, I realized that I had a problem with alcohol and went to AA to get help.  Her response was "I didn't raise a drunken slut who tries to kill herself."  Never mind that I was a virgin at the time.  As I had been raised to believe in unconditional respect, I did not cut her out of my life then.

That came when I told her I was separating from my husband and instead of being concerned about my well being, her question was "There isn't going to be a divorce, is there?"  I was emotionally vulnerable and falling apart and I could not deal with her hateful and bitchy attitude.  That was ten years ago and that was the last time that I talked to my mother.  She has reached out a couple of times, but her letters have been all about her and even though I wrote her and told her how her she had hurt me.  She gave me a vague apology and continued rambling about her.

It hurts a lot to not have a mother in my life and there are so many times when I just want someone to hold me and tell me it's going to be okay.  I've accepted that she can't be the person that I need/want her to be, but that doesn't mean it hurts any less.  As for forgiveness, I don't know if I can forgive her.  Even though I know that forgiveness is more about letting go of the pain than letting her off the hook, I struggle with forgiving her.  A large part of it is because she is the person who was supposed to love me more than anyone else and she hurt me beyond measure.  My brain knows that hurt people, hurt people, but that doesn't make it hurt any less. 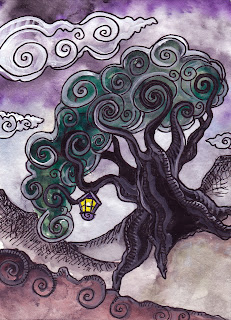 What is my mother's trauma?

At first glance, the Hermit seems an odd card to pull as I don't think of my mother as lighting a path or as being a font of wisdom.   However, I realize that I need to let go of my tarot brain and look only at the surface.  My mother grew up in a chaotic childhood and I know she didn't have a lot of friends.  When I look at the hermit as a recluse or someone who keeps to themselves, this card makes sense as she didn't invite people in because she was ashamed of her family.  When I look at how my grandmother treated her as an adult, I can understand why she did not want to bring friends home.  My grandmother had undiagnosed mental illness and somedays she could be charming and other days the nastiest person alive.  My mother also got teased as a child, which generally means withdrawing.

As an adult, at least when we lived in Maple Park, she had friends, but I think that hermit nature never goes away.  She compensated for the unhappiness of her childhood home, but making us clean the house obsessively, but I think there was a part of her that was always ashamed.  I also believe that she compensated by being a people pleaser.  She was always the one reaching out and she worked to maintain friendships and connections even when the other person did not.   She also raised me to believe that my life was all about other people.  I think she did that because she believed that you could buy friendship with acts and good deeds and she wanted me to have friends.

How does it effect me emotionally? 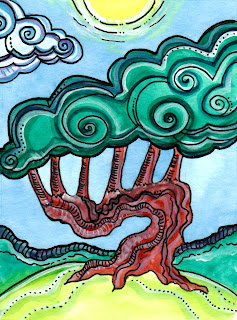 The six of wands is a celebratory card of success and rising above your circumstances.  My mother's trauma and her belief that my life was all about other people pushed me to be successful.  I never wanted to live a life dependent upon someone else and I have succeeded.  However, it has come at a cost as I like to be number one and it is hard for me to collaborate with others.  I have to be the best because if I am not the best, it means I am the worst.  That sounds utterly ridiculous, because there is room for a lot of different talents in the world and being okay is really okay.  However, when I hear that someone else did something well, I automatically take that as a slam on me, even though it really has nothing to do with me.

Rising above people and needing to always be the best makes it hard to make friends and to have people in my life who I am close to.  I know this caused issues in my marriage as well because it was hard for me to be a partner.  There is also a good possibility that I picked John because I knew he could never compete with me.  He would never be able to make as much money or lead the way I did.  Although I did not think about it consciously, I needed to be the primary breadwinner because I saw how my mother was subservient to my father as he made the money.  There was no way I could subjugate myself to anyone.  Throughout our marriage, I don't think I ever gave him room to grow and become someone different.  This in no way excuses the abuse that he subjected me to, but it does help to put things into a different perspective. 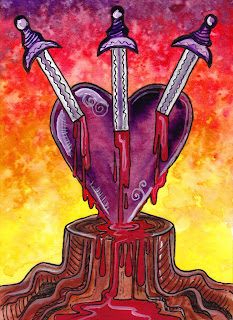 I've had problems connecting with and loving people my entire life.  I just don't trust a lot of people and I am always afraid I am going to get screwed over.  On the flip side is the continual searching for a rescuer, someone to recognize my situation and save me.  It has led me to holding on too tightly to people and freaking them out.  There are times I feel I vacillate between holding on too tight and putting up my armor.  Although some would view these as emotional issues, for me they are spiritual because the wound is spiritual.  She reached inside me and harmed my very soul.

How does it effect me physically? 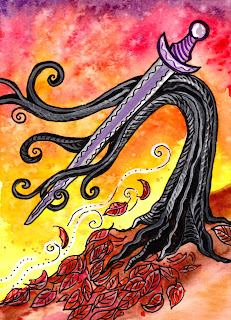 The knight of swords tells me that I always have my shields up and my sword at the ready.  I always know where the exit is and I keep my muscles tensed when I am around people I don't trust, which is almost everyone.  It is difficult for me to let my guard down and actually let people in.  When I do, it feels so good as I feel my entire body relaxing.

This reminds me of the day before the day that John had his heart attack.  I was out running around and having a great day and the thing I remember the most about that day is that my shoulders were lose and didn't feel tensed up.  The absence of the tension helped me to realize how tense John made me and how much I held that tension in my body.

I also know that my weight is related to my emotions and that at some point along the way, my psyche decided that adding pounds would protect me.  However, the flip side of that is that the pounds are also harming my body.

A big part of my healing is going to be getting my body and mind in synch and letting down my guard. 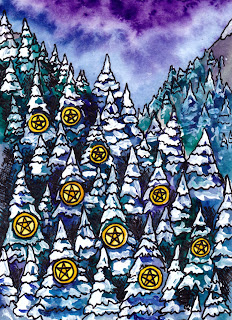 My first thoughts on seeing the ten of pentacles is to find a community to love and support me as a heal.  In some ways that is very ironic because it is a family that caused so much of my trauma.  However, I know from my experience in Al-Anon that I likeminded community can be very healing.  What I found in Al-Anon is that the norms I grew up with as a child were not healthy.  While my mother and the rest of her family, always felt empowered to give unsolicited advice, which was often harmful and hateful.  For instance, the first thing my mother said when she walked into my new house in Arlington Heights was "Why did you put that painting there?"  I mean really, who the hell walks into someone's house and starts criticizing their decorating.  That is a flat out hateful thing to do.  And the worst part is that she got so hurt and offended if you called her on her shitty behavior.

In contrast, if people in Al-Anon give unsolicited advice, there are people who are quick to point out that that is unacceptable.  I remember when I was on the message boards and was sharing a problem I was having with one of the kids and this one woman started giving me advice and others shut her down.  I need to find a community of people who will love and accept me.  I'm not sure where that community is as Al Anon i always such a hit or miss proposition with some groups being awesome and others not so much.  I will turn it over to my higher power.

- February 12, 2022
Email ThisBlogThis!Share to TwitterShare to FacebookShare to Pinterest