Unlike my mother, whose trauma was deliberately inflicted, my father's trauma was mostly situational.  He was born the third son of an electrician and a homemaker.  By all accounts they were a loving family and were working to improve their lot in life.  Unfortunately, my grandfather was electrocuted when my dad was three years old and my grandmother went into a tailspin.  The family moved from Bethalto, IL to Poplar Bluff, MO so that my grandmother could be closer to her family.  My dad grew up poor, but he was surrounded by love.  In addition to his three brothers, he also had a lot of cousins who lived down the street that he played with.

If there was any significant trauma in my father's life, other than losing his father and growing up poor, I never heard about it as he pained his childhood as happy and loving, despite being poor.  However, my father was a product of his times and the attitudes he grew up with harmed me.  He grew up believing that elders were always to be respected, even if they were abusive, and that women were second class citizens.  I know that he loved me, but I also know he expected me to grow up to be a wife and mother.  Shaking those attitudes was hard and I know that there is a part of me today that feels I am disappointing him.

I will say that despite not having a father of his own, my father worked hard to provide for us and be loving.  I remember summers when we would go out to White Pines and he would come out to be with us in the evenings, then go home so he could go to work the next morning.  A lot of weeks he worked 7 days a week so that we had the things that we needed and wanted. 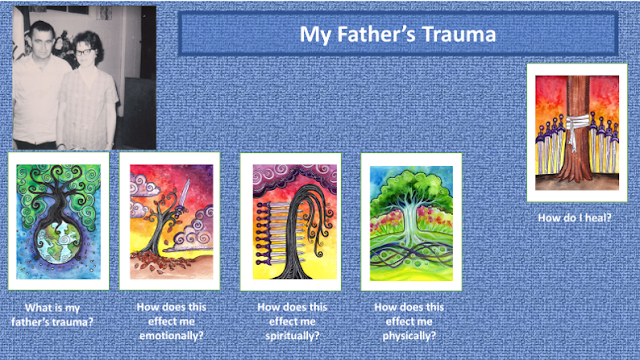 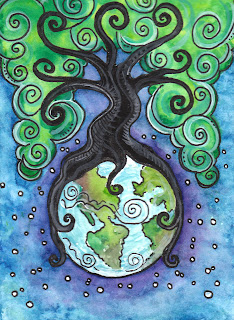 What is my father's trauma?

The world seems like a strange card to pull for this question as it is a happy and peaceful card.  However, it is also a card of travel and opportunities and new beginnings.  My father's trauma was in part his stifled world view and his longing to travel and see new places even though he did not have the means to do so.  He had a poetic and beautiful soul and he longed to write and see the world, but those opportunities were denied to him because of he was the poor son of a widow woman.  He worked hard to make a good life for us and he sacrificed so that we could have a good life, but he was never truly fulfilled.

His worldview also kept our family from advancing because he was brought up to believe that a man's role was to support his family and a woman's to keep the house.  That meant he never supported my mother working and he always sabotaged whatever jobs she got.  Sadly, my mother had wanted to be a nurse, but that wouldn't have been acceptable in my father's world.  However, if he had let her pursue her dreams, he would not have had to work so hard.

My father's worldview also hurt me as I was raised to believe I was a second class citizen and that my worth was in finding someone and marrying them.  I know that hurt me tremendously because I never wanted that life.  I am so glad that I have Cam and Sean, but I would have been happy living a life alone and traveling and exploring who I was.  However, that was never deemed an acceptable life for a woman. 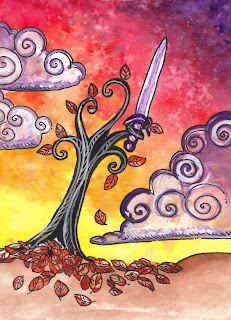 How does this effect me emotionally?

This page of swords is telling me that I have grown tremendously over the past few years. The page of swords is all about facing your problems directly and not letting them fester.  It is about learning from the experiences I have had.  It took me a long time to acknowledge that the father I loved had hurt me with his attitudes, but I finally learned that lesson when I estranged myself from my mother.  I had tried very hard to ignore the pain she caused me because she was my mother and I had to respect her at all costs.  However, when the pain she was causing me became too much, I had to cut her out of my life in order to move on and grow.  Initially, I had a lot of guilt over that because my father had raised me to respect my elders, but when it came down to her or me, I had to choose me.

That was my first break with my father's teachings, but as I reflected on my life.  I realized that this teaching had also kept Elaine (my maternal grandmother) in my life even though she was toxic.  I am sure that my father counseled my mother that she had to respect her because the bible says respect your parents.  Elaine caused irreparable harm to my mother and to me both directly and indirectly.  If my father had been able to step back and see that there were exceptions to respect your elders, we all would have been better off.

I also had to accept that my father was sexist and believed that women were second class citizens and that that belief caused me a world of hurt.  I have never felt confident at work because in the back of my mind, I am always hearing my father telling me to leave the good jobs for the men.  I also believe that if he had not raised me to be a second class citizen, I never would have married John.  However, that also means that I never would have had the kids.

The good thing is that I have been able to recognize how my father harmed me and have started working through the pain. 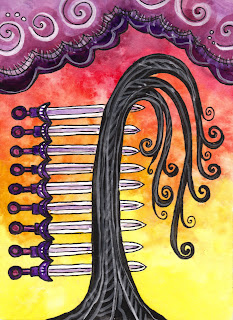 How does this effect me spiritually?

It causes me to have difficulty trusting people and to always be waiting for someone to put a sword, or 9, in my back.  It has also caused me to reject Christianity because I feel that there is nothing there for me and I feel betrayed by the people in church as they raised me to hate myself and believe that I was a second class citizen.  What I realized when I started exploring the world, was that this was not personal and that every woman exposed to Christianity had been raised to hate herself and believe that she is the cause of all the evil in the world because Eve at the apple.

The nine of swords tells me that all the anguished caused by my father's beliefs are now internal.  I internalized all the garbage and lies that he told me and that now I am the one that has to take steps to fix it.  My dad is gone and those people at the misogynistic churches are part of my past.  I have to choose to heal from the pain.  I have to choose to know that those folks were products of their upbringing and that nothing they did or said was personal.

How does this effect me physically? 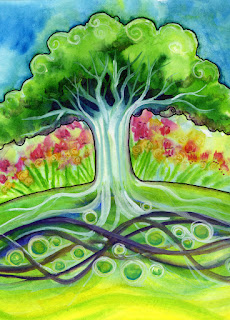 Regeneration is an interesting card as it is not part of the traditional tarot, but was added to this deck. There is a part of me that doesn't want to read it because it is "not traditional," but I also don't believe in pulling cards because you don't like something.

The message that I get reflecting on this card is that I was brought up not to treasure and honor my body for the amazing creature it was.  I was brought up to believe my body was shameful and that I was shameful for being female.  This has impacted me in so many ways because instead of seeing my body as beautiful and capable of taking care of me, I was taught to treat my body like garbage and to not honor it.

I know my body has the power to regenerate and heal itself, but I have to do my part by honoring my body and not pumping it full of sugar and chemicals.  I am harming my body's ability to take care of itself with my own actions. 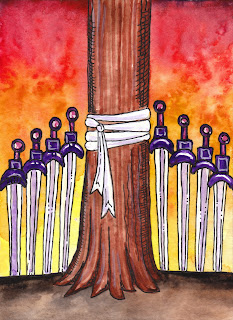 The eight of swords tells me that the decision to heal is mine.  I can choose to let go of all the old baggage that I am carrying around or I may choose to remain trapped.  I can choose to realize that I am a fully actualized human being that does not need to be reliant on a man to take care of me.  It doesn't matter what my dad's thoughts were on a woman's role, I need to come to my own conclusion and I have concluded that I am capable.

I can also choose to heal my body by working to release my need for sugar and do the things that honor my body instead of things that kill my spirit and my flesh.

What is interesting for me is that I choose the Tarot of Trees to do my trauma work with as I did not want a deck with human figures.  However, one of the things that I really need to work on healing is interdependency.  I need to realize that I can be interdependent with other people without losing my independence.  And trees are incredibly interdependent organisms.

- February 19, 2022
Email ThisBlogThis!Share to TwitterShare to FacebookShare to Pinterest