The Bully at the Office

I was bullied as a child and my personal belief is that bullies are irredeemable and should be put down like rabid animals.  I believe this because bullies create self esteem issues, cause people to die by suicide, and cause people to have trust issues.  The effects of bullying are long lasting and can destroy people's lives.  Unfortunately, we live in an unrealistic society that frowns on putting bullies down and instead believes that somehow, miraculously, they can be rehabilitated.

There is a bully in my office.  She is one of those ugly mean girl types who sounds so nice, but is hateful behind the scenes and everything she does is dripping with sarcasm and derision.  Unfortunately, outing her as a bully on social media and providing her real name could lead to unpleasant consequences for me so for now we shall call her The Bitchy One (BO) for short.  However, as soon as I am able to do so, I will out her for all I am worth.

Since my boss has so far refused to do anything about BO, society frowns on my taking her out like the hateful creature she is, and I'm not in a position to quit my job just yet, I'm taking to the tarot to see what I can do about the BO situation (okay I'm just juvenile to think that is hysterically funny). 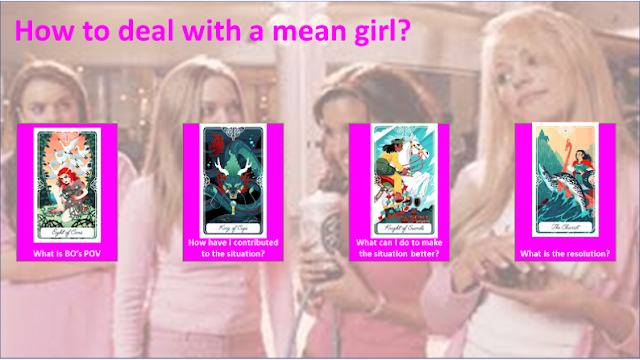 This is one of the ugliest cards in the deck.  The look on the princesses face is down right hateful and ugly.  The card is supposed to represent her being in pain, but I think she just looks like a hateful mean girl.  However, when I reflect on the card it could mean that BO is just so caught up in her own ambition that she doesn't realize how hateful she is being.  She is one of those people who believes that pulling people down is the way to make herself look better.  However, what she doesn't realize is that while that may work for a while, in the long term it doesn't as people eventually get wise to the hatefulness behind it.

2.  How have I contributed to the situation?

I have been fiercely protective of my domain and have snapped at her when she has stepped on  my toes.  I could have given her the benefit of the doubt and not assumed she meant to get into my business.  I also could have just told her once to back off, then ignored her.  Yes, she is a pushy BO, but I do not need to let her push my buttons.  I can just state my position once and back off.  At the end of the day, she cannot force me to talk to her.  I need to focus my energy on where I can do the most good and not on her.

3.  What can I do to make the situation better?

I would so love to interpret the knight of swords as going on the attack with my sword and taking the ugly BO out, somehow I think that would be frowned upon.  What this card is really telling me is that I need to be thoughtful in my actions. Whining to my boss is probably not appreciated and ignoring BO has only gotten me so far.  I need to control my impulse to rush in and fix the situation and just take things slow.  I need to be strategic.  What I really need to do is to figure out how to get BO to out herself so that everyone else sees how ugly she is.  One of the biggest ways that I can beat her is to build my own army of supporters so that when she attacks, she will run into a wall.  However, I have to be honest that seems to be so much effort to take down a little pissant.

4.  What is the resolution

What I'm realizing is that I don't even have to do anything manipulative, I just have to be my own awesome self and be the best that I can be.  I don't need to stoop to her level, I just need to rise above it all.  I don't even need to do or say anything more about her, I just go about my busy and do my own thing and let the hive mind do its own thing.

- January 22, 2022
Email ThisBlogThis!Share to TwitterShare to FacebookShare to Pinterest