Ritual to Honor My Grandmother Babcock 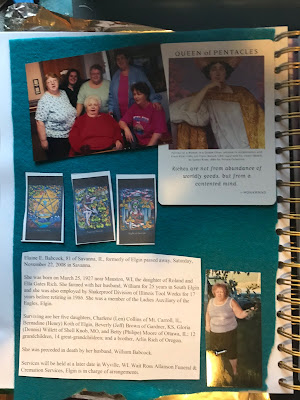 My grandmother and I had a difficult relationship and if I'm really honest with myself, I acknowledge that she had a difficult relationship with most folks. As I get older and reflect on her life, I have realized that she had an undiagnosed mental illness and she probably coped the best she could.  She and my mother had a very sick and codependent relationship.  She gave away my mother's wedding gifts to her son (my mom's brother) because he got married around the same time and apparently needed them more, she gave my brother and I cheap junk from the dollar store for Christmas while my cousins got expensive gifts.  And she played games with money by rewriting her will to whoever was in favor.

My grandmother was shuffled from nursing home to nursing home as her head games and violence caused her to be kicked out of multiple homes.  She finally ended up the same nursing home as my father and my poor mother struggled to take care of them both.  I said my goodbyes to her before she died more out of duty than any sense of love or loyalty.  When she died, I honestly felt relief more than grief.

It was only when my daughter was diagnosed with bipolar and started to exhibit questionable behavior that I began to wonder if my grandmother had had undiagnosed mental illness that caused her to behave cruelly to others.  I knew she had been trapped in an unhappy marriage and my emotions shifted from anger to more sympathy and I began to think about honoring her rather than dishonoring her.  I set about finding photos, a copy of her obituary, and anything else I could gather.  I also pulled the Queen of Pentacles from the Art Tarot deck, which quoted Mohammed, "Riches are not from an abundance of worldly goods, but from a contented mind."  And I said a quick prayer asking that she find contentment in the afterlife.

The next step was to write her a quick note thanking her for being a part of my life and as I wrote the words, I found that I truly meant them because I had learned lessons from having her in my life.

I then lit a candle and asked for her guidance: 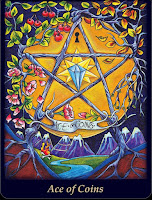 How do you feel about me?

She responded with the Ace of coins.  "You are successful and you make a lot of money and you're smart with your money.  You also don't use it as a weapon, but a tool."  She also told me that I did not need to buy affection.  This was an amazing read because my grandmother respected people with money and I appreciated the fact that she acknowledged I did not use it as a weapon.  The guidance that I did not need need to buy affection made me cry because I've spent a lot of time and money in my life placating people and trying to get them to love me because I never felt I was worthy of love. 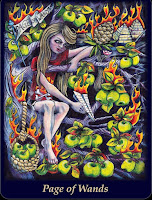 What guidance can you give me?

She responded with the Page of Wands.  :/"Let go of the anger and cynicism and open your heart and let people in.  Accept that people are imperfect, but that does not mean they are untrustworthy, but that they are human."  This was more very sound advice and it mirrored the advice that my father gave me when I did an ancestor reading for him.

How can I learn from your life?

She responded with the Eight of Swords.  "Do not stay trapped by your own miserly.  I should have chosen to walk away.  Everyone would have been happier if I would have chosen to live life on my terms"  That was an amazingly telling statement as I knew my grandparents were unhappy, but I grew up sheltered and believing that divorce was not an option.  In a lot of ways this carried over into my own marriage and in some ways I became a clone of my grand and was so angry and hurt that I was hateful and mean to everyone.  The difference is that I was aware of my bad behavior and course corrected.

Overall, this was a very insightful reading and while I'm not sure whether it is realistic to think my grandmother has evolved that much in the 10 years she has been gone, the guidance was good and made sense to me so I will take it and reflect upon it.
- March 25, 2018
Email ThisBlogThis!Share to TwitterShare to FacebookShare to Pinterest
Labels: Ace of Pentacles, Ancestor, Eight of Swords, Grandmother, page of wands, Queen of Pentacles