Ritual to Honor My Father 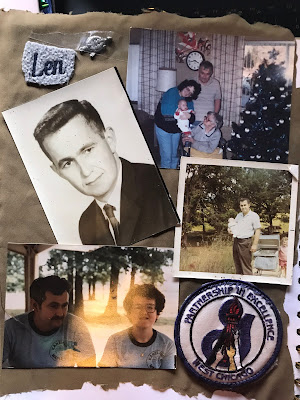 My father died the day after Thanksgiving in 2008.  I'd known it was coming as he had lung cancer that had metastasized through his body.  I was living 200 miles away and traveling even farther away for work every single week.  I made the trek to visit him as often as I could, but it never felt like enough.  I knew the end was coming when I visited him and he was a shell of the robust, loving man who had raised me.  This was also the start of a devastating period of changes in which I could only react and had no time to mourn.

The call that he was gone was devastating, but not shocking as I knew the call would be coming sooner rather than later.  However, there was no time for my own sadness as I had to drive the 200 miles through teary eyes to help my mother deal with her grief as she'd lost her mother less than a week before.  I had to become the supportive daughter and not allow myself to be the grieving child.

Fast forward a little over a year and I got another call that rocked my world, my husband had had a massive coronary and I needed to be at the hospital immediately.  Once again, I was the one who dealt with the details. shored everyone up and never let anyone see my tears.  I sat by his side, cheered him up, bathed him, and did whatever else needed to be done.

My payment for the days spent by his side was his pronouncement four months after his heart attack was that he wanted a divorce.  I was hurt, I was angry, I fell apart, but all too soon I had to pull myself together and be strong for my kids.  I had to figure out how to keep them in college, get them settled in off campus housing, and deal with all the other realities of life.

It was ten years before I finally felt strong enough to mourn my father.  I cried for my loss, I cried for my children's loss and I started to remember the good as well as the bad.  My family has always done ritual on Halloween and remembered our beloved dead, but I was ready to go deeper and to truly grieve and comfort the lost little girl inside.  Around that time, I came across Lisa de St. Croix's Ancestor Workshop and it resonated with me.

I took some time to gather mementos and photos of my father, I meditated on his life and our relationship, and I found the cards that represented both him and me according to Lisa's advice and I found cards I wanted to use to meditate on.  It was a little weird because my dad's card was the lovers and that felt really uncomfortable.  I finally pulled the lovers from the Animal Totem Tarot and I used the Hermit from the Druid Craft Tarot for my birth card. 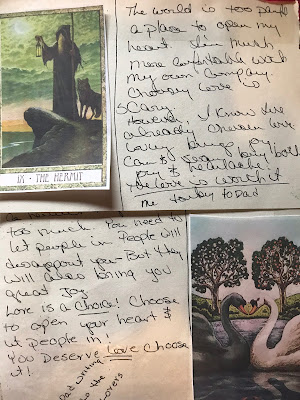 The Message from Me From My Dad

You are too much of a hermit and you withdraw too much.  You need to let people in.  People will disappoint you, but they will also bring you great joy.  Love is a choice!  Choose to open your heart and let people in.  You deserve Love!  Choose it.

My response as the Hermit

The world is too painful of a place to open my heart.  I'm much more comfortable in my own company.  Choosing love is scary.  However, I know I've already chosen love with my kids.  Loving Cam and Sean brings pure joy along with the heartache and I remember that, I remember love is worth it.

Interestingly enough, since I did this ritual, I have been seeing and finding turtles everywhere.  Turtle was my dad's nickname and when I find those turtles, I'm reminded that he is looking out for me and that love never truly dies.